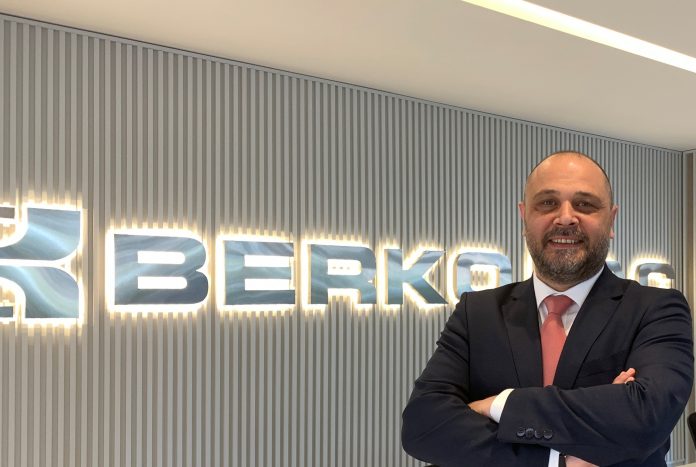 Berko İlaç, which is working and producing for ‘healthy tomorrows’ with its innovative perspective, about 800 employees and production facilities of 21 thousand square meters, which is consisting of 3 phases at world standards, is continuing to strengthen with new appointments. Berko İlaç, growing every passing day with number of product, production volume, turnover and human resource, became stronger with its new senior staff and made a breakthrough in its organizational progresses.

Oben BAYKAL
He started his career as production engineer at Roche İlaç in 2002, after graduating from Ankara Gazi University, Department of Chemical Engineering. Afterwards, he worked in various positions in production at Sandoz İlaç and then Kurtköy Facilities of Novartis İlaç. He managed the project of the design, construction, installation and commissioning of Gebze Oncology and non-Oncology Facilities of Onko Koçsel İlaçları between 2011 and 2015. Here, he contributed to the sector by sharing his experience in the manufacture of toxic sterile products, isolator technologies and containment systems at various international conferences. After he worked as the project manager in the project of manufacturing products from the cell to the finished product in the field of biotechnology at Roche İlaç between 2015 and 2018, he, for a while, counseled various companies about the establishment of pharmaceutical facilities. In order to close Sandoz Gebze-1 Factory and transfer products to Sandoz Facilities abroad, Oben Baykal, who started to work as a project manager in 2019 here, took on factory directorship for one year after the factory was transferred to Genveon İlaç. Oben Baykal, who joined the Berko İlaç family in 2021 as the factory manager and was appointed to the Factory Directorship in 2022, is married and the father of one child.

Recep AVCI
Recep Avcı, who graduated from Erzurum Atatürk University Faculty of Science as a chemist in 1982, started working in the pharmaceutical sector in Fako İlaçları in 1986. After 12 years of R&D experience at Fako İlaçları, he worked as the R&D formulation chief at Toprak İlaç between 1998 and 2000. Avcı, who worked as the formulation development chief at Bilim İlaç between 2000 and 2004, then respectively worked as formulation development manager at Abdi İbrahim between 2004 and 2013, and as the R&D group manager in the R&D center at Deva İlaç between 2013 and 2017, and as the R&D and quality group manager at Onko Koçsel between 2017 and 2020. Recep Avcı, who has started to work as R&D coordinator at Berko İlaç since 2020, has been appointed as R&D and Licensing Director. Avcı is married and the father of two children.

Cem GÜNBAY
Cem Günbay, graduated from Istanbul University, Faculty of Political Sciences, Department of Business Administration, started his career as an assistant specialist in the commercial banking marketing unit of Akbank’s general directorate, by winning the MT (management candidate) training program. Later, he worked as a finance specialist in the TATKO holding group, which includes companies operating in the fields of Goodyear tires, Billur salt, Chrysler truck manufacturing, construction and tourism. He migrated to the pharmaceutical sector in 2000 and took various administrative and managerial positions in the finance, budget-planning and reporting departments of the German pharmaceutical company Hexal for 10 years and later Sandoz group. Then, after working for a short time as a budget and reporting manager at My Technic, which is an aircraft maintenance company, Cem Günbay, who moved back to the pharmaceutical sector in December 2010 and worked as the budget and control, accounting and finance manager and financial affairs manager at Berko İlaç, respectively, was appointed as the Financial Affairs Director.

Erhan TOSUN
After graduating from Istanbul University, German Teaching Department, Erhan Tosun who started in the pharmaceutical sector as a production-planning and control assistant at Santa Farma İlaç in 2002 worked in this company in different positions in the field of supply chain management for nearly 11 years. Erhan Tosun, who completed his master’s degree with a thesis on Supply Chain and Logistics Management at Institute of Science and Technology, Bahçeşehir University, between 2005 and 2007 at the period he was working at Santa Farma İlaç, worked as a warehouses coordinator at Sandoz İlaç between 2012 and 2013. Later, he worked as the supply chain manager who is responsible for all processes at HİPP Organic Baby Foods until 2019. In 2019, he, as the group supply chain manager, was responsible for the end-to-end management of the supply chains of Arven İlaç, Verano Veteriner İlaç, and Montero food companies under the roof of Toksöz Group. Erhan Tosun, who started to work as Supply Chain Director at Berko Pharmaceuticals as of February 2022, has been taken part in many local and global projects at different scales in the fields of supply chain management and IT.

Ömer SÜRMEN
Ömer Sürmen who graduated from the Department of Chemistry, Atatürk University in 1992 as a chemist started his career as a quality control officer at Eczacıbaşı Group. Afterwards, he had the opportunity to know and work in different disciplines in Abdi İbrahim, where he stepped into his pharmaceutical career, by working as a quality control manager, R&D formulation manager, production administrator and manager, respectively, between 1998 and 2018. He has been in Algeria as an expat for the commissioning of Algeria facility of Abdi İbrahim and for making the first production for 6 months in 2017. Later, he started to work as a production manager in an Azeri-based pharmaceutical company, of which facility construction has just started, in 2018. Here, he managed the process in which the facility, having an annual production capacity of 75 million boxes and the solid, liquid, semi-solid production and packaging potentials, was established and commissioned, and in which it successfully passed the inspection of TR Ministry of Health, and in which the factory received the GMP certificate. Ömer Sürmen, who joined Berko İlaç as the Production Manager in 2022, is actively continuing social activities beside his business life and has a successful theater background in different roles. At the same time, he has been taking active role as the vice president of the Association of Chemists; he has been a member since 2012.

Hamlet KABAKÇI
After graduating from Hürriyet Anatolian Technical High School, Automated Control (Mechatronics), becoming the top student of his school in 1998, he completed Mechanical Engineering at Yıldız Technical University and then Mechanical Engineering master’s degree at Istanbul Technical University. Ahmet Kabakçı started his professional career as a maintenance and repair engineer at Honda Turkey, Inc. automobile factory in 2007, made energy saving projects and energy SCADA installations. Later, he stepped into the pharmaceutical sector with Biofarma İlaç and took charge in the installation of Hüttlin FBD, granule and Manesty coating machines. He worked with the French project team in the commissioning of new production building and new product projects at Electircfil Unifil Automotive Company. As a maintenance engineer in auxiliary businesses and production machines at Sandoz İlaç, he worked in maintenance, malfunctions, calibrations, qualifications, GEA FBD installation, Glatt Smart 700 coating installation and commissioning, and carried out energy efficiency projects with the global energy team between 2012 and 2014. Ahmet Kabakçı worked at Biofarma İlaç as technical manager and then as engineering and investments manager between 2015 and 2021, carried out conveying and installing the production lines from the Münir Şahin pharmaceutical plant to Biofarma. He realized Capex-Opex budget management of the entire business directorate by carrying out various machine upgrade projects, savings studies, installation and commissioning of new production machines. Ahmet Kabakçı, worked as the technical manager at Onko Koçsel İlaç in 2021-2022, has started to work as the Technical Services Manager at Berko İlaç as of March 2022.

Tuğba TEMİZER
Tuğba Temizer, after completing the Department of Business Administration at Bahçeşehir University, graduated from the Istanbul Technical University Human Resources Management certificate program in 2014 and the Professional Expert Coaching program approved by the ICF-International Coaching Federation in 2020, started her career in the pharmaceutical sector as a product promotion representative at Neutec İlaç in 2015. Temizer, who has worked as the product manager responsible for acute and chronic products in different therapeutic areas at Neutec İlaç, Generica İlaç and Koçak Farma companies since 2017, has been working as the Berko İlaç White Group Product Manager since December 2021.

Gökhan EZBER
Gökhan Ezber, who completed Anadolu University Faculty of Science Statistics department and Marmara University Foundation Pre MBA program, finished the MIS (Management Information Systems) certificate program at Boğaziçi University School of Applied Sciences in 2002. Ezber, who started his career in the advertising and market research sector in 1999 worked as a market research and system manager, migrated to the pharmaceutical sector in 2004 and managed the sales effectiveness and marketing support processes at Nobel İlaç. Afterwards, Gökhan Ezber, who worked as a business processes specialist and project coordinator at Santa Farma İlaç in 2013, worked with leading companies in the sector by working as a customer service manager in the unit, meeting the data needs of pharmaceutical companies, of IQVIA (Ims Health), which is pharmaceutical statistics and data company. Ezber, who developed the sales efficiency processes at Koçak Farma İlaç in 2021, joined Berko İlaç in March 2022 as the Sales Penetration Manager.

Turkish Urooncology Association and Turkish Society of Lung Cancer shared data on the effect of tobacco use on the co-occurrence of bladder and lung...

With the Invisalign system, orthodontic and restorative dental treatment planning

Abdi İbrahim is on Metaverse

English editor - 24 Haziran 2022
The award ceremony, in which the Pharmacist Entrepreneur Pharmacists Association (Pharmetic Girişimci Eczacılar Derneği) organized the fifth Farmafikir Competition, which was started in 2016...

English editor - 23 Haziran 2022
The CPHI Frankfurt 2022 event has evolved to offer attendees an advanced smart event with online and in-person components. While the outlook is entirely...