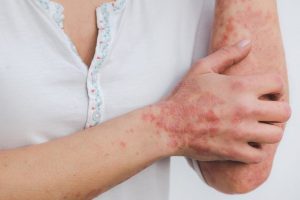 What is psoriasis? Psoriasis, der II cells in normal and disease-forming wounds because of the faster growth surface of the skin. This disease first begins under the skin. A large number of scientists, suggests that psoriasis is not yet a definite cause but the allegations, the direction is a disease caused by genetics and the immune system. When we look at the studies, it is seen that 1 out of every 3 relatives has psoriasis, and as a result, an error in the immune system causes red colored sores/spots on the surface of the skin. Also known as ” psoriatic arthritis ” This disease can also infect the joints and cause pain.

Although psoriasis is not contagious, it does not consist of only one type. Even if it is caused by the same reason, it can manifest itself in different ways on the skin. It is assumed that there are 5 known species.

This type is the most common type among patients. This type, which is generally seen on certain points of the body such as elbows, waist and knees, are inflamed wounds covered with raised and scales.

This type, which is usually seen in childhood and youth on the skin of the chest, arms and legs, appears as small red dots on the body.

It manifests itself in the armpits, groin and genitals. It is smooth in shape, bright and red in color like other species.

This type, which is generally observed in adults, manifests itself as a non-inflamed but white-filled blister with reddened skin around it. Hands and feet are the most visible places.

This type, which covers almost a large part of the body, is an inflammatory type. It intensifies from period to period, causing itching and rash.

Symptoms of the disease vary from person to person.

There are also triggers depending on these symptoms. In particular, excessive smoking and alcohol use, stress, certain drugs, etc. plays an important role in the process of accelerating the formation of psoriasis. Even if the person does not realize it sometimes, the disease process begins.

Psoriasis, which is observed to have quite high psychological effects as well as physical effects, characterizes the person as “problematic”. People with this disease become hopeless and helpless because there is no cure for the disease. Therefore, psychological disorders such as anxiety, panic attacks and depression are more common in these people. In this feature people who lack self-confidence s more gun is spinning. Since the person is disturbed by the appearance of the wounds on the skin surface, the stress level increases. “I wonder how they see me?” Those who think about how difficult it is or will be to continue living with the thought of it, find the solution by keeping themselves indoors or wearing loose and long clothes. So much so that, in interviews with people with this disease, the person states that the disease greatly affects his mood and feels “dirty” even if he takes a shower every day. Not only does he feel that way, he is also made to feel that way by the people around him. The person hesitates even to shake hands with another person. They are attracted not only because they think they are dirty, but also because they are misinformed that it is “contagious.” That’s why they avoid coming into contact with people who don’t have the disease. On the other hand, people who know more about the disease say that as they learn what psoriasis is and better understand its symptoms on their own bodies, they have the chance to embrace the disease and learn to live with it. Especially in incurable diseases, this way of thinking is very important for the patient.

In economic terms, the cost of the drugs used by the person with psoriasis can be quite high. Therefore, the person stays away from the opportunity to continue the treatment process as it should be. The fact that some drugs are not covered by insurance only makes this situation much more difficult than it should be. In addition, the probability of a person with psoriasis being able to have a job decreases. The employer is biased. That puts the person in a difficult situation.

If you are wondering how to deal with psoriasis…

One of the most effective methods of dealing with psoriasis is to follow the treatment recommended by your doctor very well. In this way, you can get used to this disease as soon as possible, and at the same time, you can continue your life much easier.

Cold weather is one of the top-ranked triggers. Therefore, take care to keep your body warm to prevent itching and rash.

In any extreme case, consult your doctor. Don’t try any natural method you see online or hear from someone. Remember that your body is different from everyone else’s and may not show the same reaction.

Most importantly, love yourself. Get rid of the thoughts that make you unhappy, stressed and unnecessarily busy. Realize that this situation is not unusual, that there are millions of people like you, that your life will take a better course if you embrace it all. Keep away from those who marginalize you. Do not forget that you; You are beautiful for who you are.

The main purpose of the World Psoriasis Day, which is held on October 29 every year, is to raise awareness; We can also say that it means facilitating access to treatment, erasing the wrong information about the disease and teaching the truth and coming together. This organization is administered by the International Federation of Psoriasis Societies (IFPA). This federation, which has members from all over the world, works hard to make the voices of 125 million people heard. Members of this federation meet regularly to discuss important issues related to the disease and cooperate with each other.

Raising awareness is vital for these patients. In addition to its physical effects, it plays an important role in reducing its psychological effects. In this process, patients realize that they are not alone, have more information about the disease, and get rid of the thoughts that the disease is contagious. Patients who come together feel safer when communicating with each other, and this minimizes the effects of marginalization.

Not only awareness is raised, but also various activities are organized in which everyone can participate.

Can I attend this national day?

Certainly! This special day is not only an event that people with the disease can participate in, but also a day where you have the chance to be with and support people with the disease. It is enough to contact your national psoriasis association to find out the plans for this day where you can benefit from all the events. If you live in a country that does not do these activities or is not a member of the federation, you can do something yourself. Prepare brochures, organize walks and runs. Organize your own by creating communities. Wear orange and lavender clothes, make them feel that they are not alone. Follow the social media accounts of the International Federation of Psoriasis Societies (IFPA) to be informed about all the events of this day.