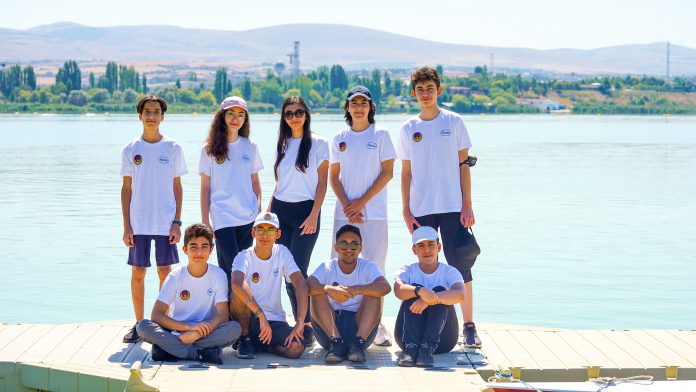 Launched in cooperation with Roche Diagnostics Turkey and the Turkish Education Association (TED) to raise the health awareness of the younger generations, the “Healthy Future with Education” project’s first phase was completed.

Within the scope of the project, a final survey was performed on students and parents to evaluate the trainings and activities carried out during 2020-2021.  According to the survey, 98 percent of the students became more aware of health. The “Healthy Future with Education” (Eğitimle Sağlıklı Gelecek) project was implemented with the collaboration of Roche Diagnostics Turkey and Turkish Education Association. The project aimed to develop behaviors that will positively affect the environment of young people and their parents by providing trainings that contribute to the psychosocial development and health awareness of the students. At the end of 2020-2021 semester of the project designed for public high school students who benefit from Turkish Education Association’s Full Education Scholarship and their families, a final evaluation survey was applied to students and parents to measure the effectiveness of the trainings. 81 parents (mostly between the ages of 40-45) and about 200 students (54% girls, 46% boys) in public schools in Ankara, Istanbul, Izmir, Diyarbakir, Malatya and Kayseri participated in the survey.

During the 2020-2021 semester, 18 different trainings were organized for students within the scope of the project. About 600 students participated in the events. The ratio of trainings to meeting the overall expectation level was 86 percent, while 98 percent of students were more conscious about health after the trainings.

Compared to the first survey results in November 2020, the proportion of students who exercised regularly increased from 48 percent to 55 percent; the level of knowledge of students about nutrition and healthy foods increased by 8 percent, from 67 percent to 75 percent.

The trainings that students found most useful were; “First Aid Awareness”, “Oral and Dental Health” and “Coping with Exam Anxiety”. These were followed by “The Importance of Sports in the Individual Development”, “Social Intelligence and Networking”, “Ethics in Internet Use” and “Career Development”.

Students who participated in the trainings stated that they have improved socially and intellectually, learned new things about health, while 91 percent of the students said that they pass on the information they have learned to their environment.

Students apply their learnings in their daily lives

The responses of the students within the scope of the survey showed that the contribution of project trainings in their knowledge was high and that educational subjects attracted their attention. The survey results also found that the trainings on “Personal Growth” increased students’ interest in the project, while 93 percent of them stated that they applied what they have learned from the trainings to their daily lives.

Students’ awareness about the right to health increased

At the beginning of the project, it was observed that 50 percent of the students did not fully know the rights and responsibilities they had while receiving treatment in health institutions. Yet, the awareness level in these subjects increased to 90 percent after the trainings.

Parents are also satisfied with the trainings

Within the scope of the project, “Cervical Cancer Awareness Training” and “Substance Abuse Prevention” trainings were organized for parents. A total of 187 parents from Ankara, Istanbul, Izmir, Diyarbakir, Malatya and Kayseri attended the events. After the trainings, 81 parents, 70 women and 30 percent men between the ages of 40 and 45, answered the final evaluation survey of 30 questions. The majority of parents who responded to the survey said that the trainings were beneficial for them and their children and found the contents useful.

85 percent of parents who responded to the survey said they were already informed about protecting their children from drugs and other substances, and that their knowledge increased after the education. Parents stated that after the trainings, their children began to eat healthy food instead of packaged foods and they started to exercise regularly which also encouraged parents to live a healthier life.

The survey results revealed that the level of knowledge of the lecturers increased the interest of parents and students in the project. During the pandemic, supporting students with online education gained the appreciation of parents. Students’ trainings were followed by parents, while their participation was encouraged.

Burçak Çelik, General Manager, Roche Diagnostics Turkey, Head of Turkey & Central Asia and Caucasian Countries Management Center made following statement about the project: “As Roche Diagnostics Turkey, we aim to implement projects that will transform our corporate skills into social benefit while working with the mission of improving people’s lives. One of the issues we care about the most is raising social awareness in the field of health. In this respect, we believe that we should first ensure that our young people are aware of health. Therefore, we have implemented the Healthy Future with Education project.

Of course, we couldn’t have done this alone. We believe that to generate a real social benefit, key stakeholders of the problem should work together. That’s why, we worked with the Turkish Education Association and valuable academicians in this project. We have successfully completed the first year of our project with the strong cooperation of our students, parents and Roche employees. The results of our survey that we implemented at the end of the first year of the project showed that 98 percent of students became more aware of health, which shows us that we are on the right track.

We will continue our project, which we think is an important example of private sector and non-governmental organization cooperation. In the next phase of the project, we aim to focus on volunteerism and climate change, which has affected our country and different parts of the world in recent days, as well as health awareness trainings.

“I hope the Healthy Future with Education project will inspire and mobilize other companies as well.”

Selçuk Pehlivanoğlu, President of the Turkish Education Association, said: “As Turkey’s first and most active non-governmental organization in the field of education, we are moving forward with the principle of ‘putting education first’. To date, we have reached nearly 50,000 children with our scholarships. We have always been there for our students during the COVID-19 pandemic. In this process, we are happy to cooperate with organizations that think like us and care about children and young people. With our collaboration with Roche Diagnostics Turkey, we have seen once again that we are stronger when we work together. Choosing to be more disciplined and more resilient during the pandemic was the choice of our students, teachers, colleagues and myself, the members of the Turkish Education Association. Therefore, Roche Diagnostics Turkey’s project that covered basic rights, psychology, environment and nature in the scope of health was very valuable for us. This project was very important for our children and their families to examine the basic human rights of health. In addition to basic hygiene and awareness trainings, I believe that trainings such as psychological robustness, risks of substance use and emotional intelligence are also very critical. In particular, I think that the trainings that our children participate on how to cope with difficult situations and how to be resilient mentally and physically will be very useful in the future. In addition, our teachers and academicians communicate them regularly that the most important element of spiritual and social well-being is sports. We support them to focus on a sports branch and to adapt it to their lives. We, as the institutions and people who love their country deeply and focus on the development of young people, will always support our children.”