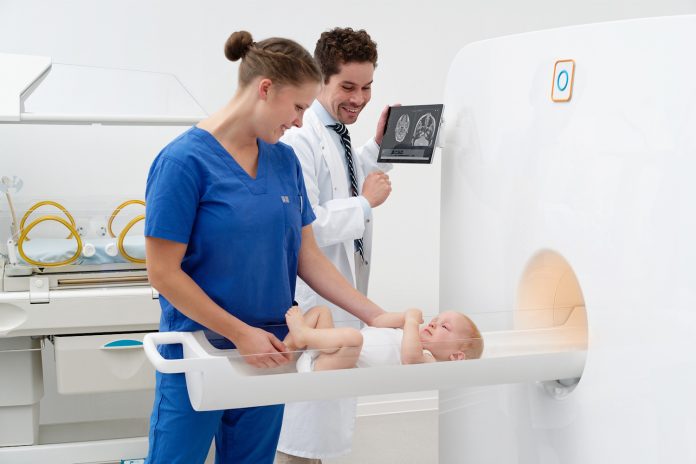 Germany – EINPresswire– MRI scanners are a key diagnostic tool but they are big, very heavy and need liquid helium to cool them. Neoscan Solutions invented an MRI scanner much smaller and lighter which could be placed directly in the children’s ward of the hospital, to keep journeys short and to scan sick babies in their sleep. Key to the much smaller design is the use of digitizers and AWGs by Spectrum Instrumentation that offer sub-nano second, coherence precision to generate the scanner-signals and capture the results.

Current MRI scanners weigh around eight tons and therefore need to be located on floors that can take this weight, which means either specially reinforced floors or locating them in a basement. They also require ca. 40 square metres for the scanner and all the support equipment. Lastly, they need to be supercooled with liquid helium, which needs special handling.

“Having worked with MRI scanners for many years, I recognised the problem,” explained Stefan Roell, Founder of Neoscan Solutions in Germany. “Scanning a sick child usually means a long journey out of the ward to the scanner and babies may need support equipment that is not easily transportable. Because of this, sometimes an MRI-scan is not even done. We have designed an MRI scanner specifically for new-borns and infants which means that the hole in the middle is only 30cm in diameter, not 60cm. As a result, the scanner is much smaller (170cm x 150cm x 110cm) and can go through standard doorways. With a weight of only 2000 kg, it can be located on standard floors and, needing only ten square metres, it can be installed in a spare room directly on the children’s ward. Carrying a sleeping baby only a few meters to the MRI is a big advantage, saving a long journey through the building and the need for sedatives to keep the baby motionless for the scan.” 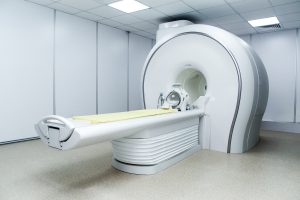 Innovations needed
The technology and field strength of the Neoscan machine is identical to current scanners so that no new clinical studies are required to validate it. Achieving this needed several innovations by the company. Firstly, to shrink the size, the team had to develop a dry magnet that would create the standard 1.5 Tesla field inside the hole, but without requiring liquid helium. This is done by an inner, cylindrical magnet generating 2.5T and then an outer cylindrical magnet that counteracts the inner field to provide strong, active magnet shielding so that there are no stray magnetic field left beyond about 1m from the device’s cover.
The second innovation was in the control electronics. Current MRI scanners typically require three big racks of specially developed electronics, that have been custom designed and built by the MRI manufacturer. Neoscan Solutions chose a different approach. The team uses a PC which runs the software that Neoscan has created plus high-end measurement PC-cards from Spectrum Instrumentation. The signals for the MRI are generated by the M4i.6620-x8 and M2p.6546-x4 AWGs (Arbitrary Waveform Generators) and then analysed using an M2p.5968-x4 digitizer. The system uses Spectrum’s SCAPP software drivers that enable a Graphics Processor with 5000 cores to perform the parallel processing, instead of using only 8 or 16 cores of a normal CPU.

Sub nano-second precision of Spectrum cards
“As a start-up, we could not afford to create specialized hardware and so we used this route of high quality, standard cards providing a platform to run our software on,” added Dr Roell. “This meant that we could focus our skills on the software development with very fast development cycles in the knowledge that the hardware was already tried and tested. This was only possible because of the design quality of the Spectrum cards. For MRI, it is vital that there is phase coherence in the 64MHz signals, otherwise there will be cancellation effects. In practice, that means that the AWG and matching digitizer have to have sub-nanosecond coherence precision, which the Spectrum cards achieve. During the research phase, it was hard to determine this from the specifications of the cards provided by the various suppliers that we contacted, as it is a rather unusual level of detail. However, Spectrum was outstanding in helping us with technical support both in the specification of the best cards to use and then again during the implementation. A rival proposal took weeks longer to arrive and was grossly over-specified and over-priced as they had not made the effort to understand the detail of our project.”